A study has compared the effect of drinking a beverage of sucrose against three low calorie sugar substitutes and found those eating the substitute versions ended up overcompensating their intake to eat more calories at their next meal.

The study took 30 men, of average BMI (21.7) and average body fat (17.6%).  The day before the study they would undertake no vigorous exercise, eat a standard evening meal and fast for 10 hours.  They would eat a standard breakfast and then have a drink mid morning which they had to consume within 15 minutes.  The drink contained either:

The drinks were flavoured with strawberry and dyed with a pink food colouring so they looked and tasted similar.

The participants would then rate their appetite and mood every 15 minutes until the first hour.  They would then receive lunch of fried rice and could eat as little or as much as they wanted.  The amount they ate was monitored and participants were asked to keep a food diary to assess what they ate for the rest of the day.  This was then added up to work out their daily intake of energy.

Blood was also taken to look at what happened to their blood glucose and insulin levels for 3 hours after the beverage intake.

It was a randomised crossover study, meaning all participants would come in for 4 separate days and try each of the sugar beverages over the study.  There were at least 5 non test days in-between these test days.  The participants were blinded so they didn’t know which drink they were having and so were researchers who assessed the outcomes and performed the analysis.

Overall the stevia and monk fruit were rated as slightly less sweet and more bitter than the sucrose and aspartame.

The low calorie sugars led to overcompensation of eating later on

Those eating the non-sucrose sugars (aspartame, monk fruit and stevia) had less calorie intake from the beverage but made up for it by eating more lunch.  Over the entire day of food intake there was no difference between the amount of energy intake between the four drinks.  So while the low calorie sugars saved energy intake from the beverage it led to an increased appetite and overcompensation of food intake later in the day.

The sucrose caused the blood glucose and insulin to spike soon after consumption, this was more stable in the other sugars initially but they caused a sharper rise in the glucose and insulin response following lunch.  With no overall difference in glucose or insulin over the three hours between the four sugars.

The benefits of this research was that it was the first study to investigate the effect of monk fruit on energy intake, glycemic and insulin responses.

But it does have limitations, with only 30 participates, it wasn’t a large study and it was also a very short study looking at just one day per beverage, this doesn’t show you what would happen to energy intake and weight over weeks to months of intaking sugar substitutes.

The study also relied on participants recording what they ate and drank for the rest of their day in a food diary, this may not have been accurately recorded.  To attempt to overcome this the researchers asked all participates to take photographs of what they consumed, it was reviewed by trained researchers and just one nutritionalist then entered the dietary data for consistency.

The study took 48 healthy men, they ate a standardised meal prior to 8 pm the night before the test and the next morning they were fed one of 3 meals based on oven baked pastries with a filling of:

The meals were matched for weight and came with equal quantities of water, with both the high protein meals being matched for energy, protein and fat content.  The participants then evaluated how hungry they were for the next 3 hours and were then allowed to eat a meal of pasta bolognese and told to keep eating until they were comfortably full.

The study was organised so that participants came back to try all 3 different meals, 5 participants dropped out: 2 did so due to gastrointestinal upset and 3 because of a lack of time, leaving 43 people in the study.

The study authors question weather the fibre within the meals effected the results.   The high protein legume meal had 25 grams of fibre per 100g, with the lower protein vegetable meal having 10g and the high protein meat meal having just 6 g, this could have led to participants feeling fuller due to the increased fibre content.

They do however highlight strengths of the study, such as having used real foods which can be easily replicated while other studies have compared meals made of unnatural products and supplements.  The use of natural foods is the reason the study authors had issues matching the fibre content of the meals.

The study was part of a project called: ‘optimal well-being, development and health for Danish children through a healthy New Nordic Diet’ and was funded by the Nordea Foundation (which awards donations to those who promote good living in Denmark) and from The Danish Agriculture & Food Council.  Furthermore one of the authors acts as a consultant for a number of companies including the Global Dairy Platform, McCain Food, McDonald’s and Weight Watchers.

As the American Journal of Clinical Nutrition publishes an article highlighting the beneficial aspects of a high fat diet, is such an indulgent diet really good for you? 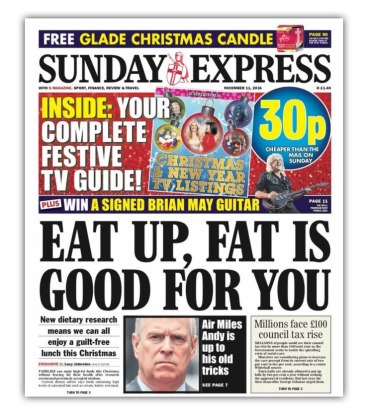 The article in question is:

Visceral adiposity and metabolic syndrome after very high-fat and low fat isocaloric diets: a randomized controlled trial.  It was performed by researchers at the University of Bergen in Norway.

So what did the study authors do? Well they recruited 46 men between the ages of 30-50, who responded to a advert in a local newspaper, they had to have a raised body mass index and waist circumference.  They needed to have no food allergies or regular medications and no severe disease diagnosis.

The participants were given a recipe book to help them with choosing meals that reflected their respective diet.  All particpants took a vitamin tablet and companies supplied some additional ingredients such as butter, coconut oil, a sugar substitute and plant based carbohydrate alternative.

It’s worth noting that both diets emphasised low processed and low glycaemic food.  Both diets emphasised homemade meals.  Both groups were told to avoid hydrogenated vegetable fat, specific plant oils, sugar and highly processed foods.  They were also told to eat 500 grams of vegetables and fruits every day and to eat vegetables with every meal.  The high carbohydrate diet were also told to try and incorporate fruit juice.

2 men withdrew before the experiment started and a further 4 dropped out early on and 2 men were excluded because they hadn’t complied with the diet, leaving 38 in the final numbers, 18 eating the high carbohydrate diet and 20 in the very high fat diet.

Overall both diets led to the participants having smaller waists, less fat on their abdomen and a reduction in weight and overall there were less fats circulating in their bodies.  But we should take these results with a pinch of salt, firstly there really aren’t that many people in the trial, they’re also all men, all fairly young in age (30-50 years) and carrying no significant medical diagnoses.

The study is not really comparing like with like, to do that you would need a group of men eating their standard diet.  What we have here is men who were told to eat one of two diets which both promoted whole foods and emphasised an intake of fruit and vegetables.  Both diets used the same foods, but in varying quantities, so it can be argued that the benefits reflect eating whole foods over processed food.

The study ends with the following words, “Our study cautions against extrapolating short-term (1–2 mo) metabolic responses to longer-term effects of macronutrients on cardiometabolic risk.” i.e. just because we did this for 12 weeks, it doesn’t mean you will see benefits in the long term.

This is a text widget, which allows you to add text or HTML to your sidebar. You can use them to display text, links, images, HTML, or a combination of these. Edit them in the Widget section of the Customizer.